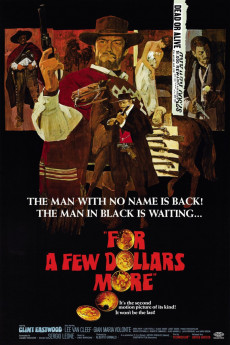 Drifting from town to town, the poncho-clad Man with No Name and the lightning-fast right hand rides into the town of El Paso, in search of the maniacal escaped convict, El Indio. It's been eighteen short months since the deadly confrontation in Per un pugno di dollari (1964), and this time, the solitary stranger, now a professional bounty hunter, will have to go against his beliefs and do the unthinkable: join forces with the hawk-eyed marksman, Colonel Douglas Mortimer, to collect the hefty reward. Now, as El Indio and his cut-throats have already set their sights on robbing the crammed-with-cash Bank of El Paso, the stage is set for a bloody showdown at high noon, against the backdrop of silent double-crosses and fragile allegiances. But, is it worth dicing with death for a few dollars more? —Nick Riganas